George Angehr is a world-class ornithologist, but he's also a world-class museum creator. On the same day he led us a fascinating walk along the birding paradise of Pipeline Road, he also introduced us to his crowning achievement, the soon-to-open BioMuseo in Panama City. Angehr is Curator of Exhibitions for the BioMuseo.


BioMuseo is located on the Amador Causeway at the Pacific Ocean entrance to the Panama Canal. The building was designed by world-renowned architect Frank Gehry. It's colorful roof is visible for miles and is said to mimic the plumage of the country's many tropical birds. 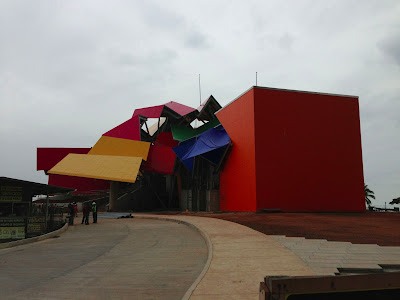 The museum is divided into eight galleries that explain the origin of the Isthmus of Panama and its huge impact on the planet's biodiversity. They are:

Gallery of Biodiversity -- A ramp will welcome visitors to the world of natural science and the explosion of life in Panama.

Panamarama -- A projection space on three levels and 10 screens immerses the visitor in an audiovisual presentation of the natural wonders of Panama's ecosystems.

Building the Bridge -- The tectonic forces inside the Earth that formed the isthmus are represented by three 14-foot-high sculptures.

When Worlds Collide -- When the isthmus was closed, there was a great exchange of species between North and South America. A stampede of animal sculptures illustrate the movement of 72 species north and south across the isthmus beginning nearly 3 million years. 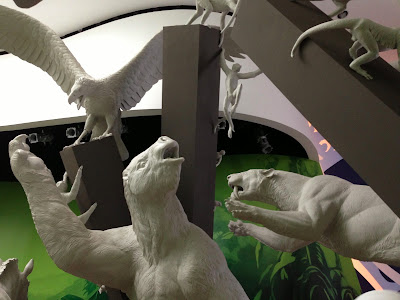 Human Path -- In a partially open space, 16 columns tell the story of humans on the isthmus, from prehistoric times to the present.

Oceans Divided -- When Panama emerged, two very different oceans were formed, changing lives all over the Earth. Two multi-story aquariums will illustrate how the Pacific and the Caribbean evolved separately because of the isthmus.

The Living Web -- A huge sculpture representing a fig tree will illustrate how plants and animals are interconnected.

Panama is the Museum -- The land around the museum will be a botanical park which will link the museum with the rest of the country.

The first five galleries are schedule to open in January 2014.

The University of Florida has been a major partner in the development of the exhibits for the BioMuseo. UF's Panama Canal Project PIRE has been collaborating with BioMuseo for the past three years, providing them with fossil casts for display in some of the galleries. The Florida Museum of Natural History is also providing a giant Megalodon shark jaw to BioMuseo on long-term loan.
Posted by Explore UF Research at 8:11 PM 1 comment: 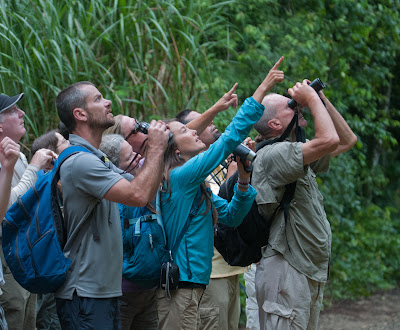 During World War II the United States constructed an oil pipeline from the Pacific to the Atlantic sides of the Panama Canal to ensure a steady supply of fuel in the event of an attack by the Japanese or the Germans. That attack never came and after the war the road along the pipeline gained a reputation as one of the best birding sites in the Americas. In 1999 the canal was turned over to Panama, which has protected all of the land around the road.

It's not often that you get to explore a place with the person who actually wrote the book on it. But that's what we got to do today, walking Pipeline Road with George Angehr, author of “The Birds of Panama: A Field Guide." Over the course of two hours, we saw many species of birds, including trogons, toucans, antbirds and flycatchers. In addition we were treated to howler monkeys, a pygmy three-toed sloth and a brigade of army ants.

Angehr's encyclopedic knowledge was evident from the moment we stepped onto the road. Within minutes he was whistling in perfect unison with the birds in the forest and we were following his pointing finger to branches high in the canopy.


Posted by Explore UF Research at 4:03 PM No comments:


Today we're off to Barro Colorado Island. Here's some background from the Smithsonian Tropical Research Institute, which manages this world wildlife treasure in the middle of Lake Gatun, the central waterway of the Panama Canal.

The view from the veranda at Barro Colorado Island.
Posted by Explore UF Research at 8:51 AM No comments:

A Life in Science 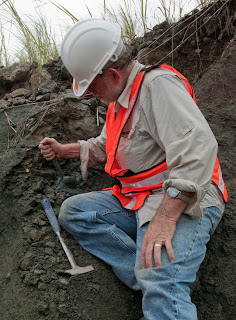 Almost 40 years into a distinguished career as a paleontologist at the University of Florida, Bruce MacFadden will be the first to admit that his interests have moved in recent years toward science education and the training of the next generation of scientists. It is what motivated him to develop the Panama Canal Project PIRE through the National Science Foundation.

But that doesn’t mean he doesn’t still like to get his hands dirty occasionally. Today, he gave a clinic in how to collect rock samples, and it was fascinating.

One of MacFadden’s scientific interests is paleomagnetism, the study of the record of the Earth's magnetic field in rocks. Paleomagnetic rocks are extremely useful to paleontologists because they enables them to precisely date the fossils in those rocks.

So MacFadden’s goal was to collect rock samples to test for their paleomagnetism. After carefully scoping out an appropriate site, MacFadden went to work, armed with a pick axe, a hammer, a chisel, a knife and a compass. Wielding the pick axe, he dug away the soft clay around a promising sample. Then he was ready to take some measurements. Key to determining paleomagnetism is precisely measuring the sample’s orientation relative to magnetic north. Using a special Brunton compass, he oriented the sample to north, writing the compass reading right on the rock. Finally, he used the hammer and chisel to pop the sample from the wall. 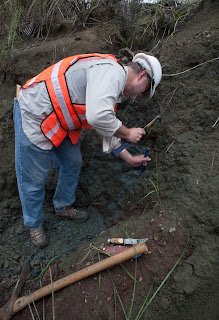 Over the course of two hours, MacFadden collected 10 samples from two sites. The carefully wrapped rocks will be shipped to the UF geology department in Gainesville, where their magnetic fields will be measured.

MacFadden’s field notebook is testament to his scientific process. The current version, in use since 2002, reflects his travels throughout the Americas. Inside, are measurements and drawings in neat, precise handwriting. Each follows a convention he has developed over his career. In this case, the first sample from the first site he has collected in 2013 was marked 13-01-A, the second sample was 13-01-B, and so on. 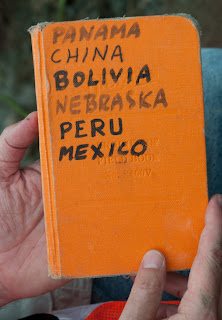 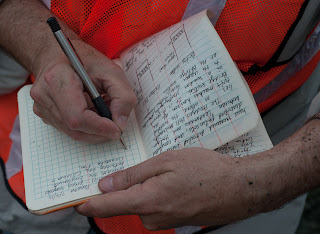 The work was hard and MacFadden was soon soaked with sweat and covered with muddy clay. But he was clearly in his element.

A few hours later, a freshly showered MacFadden was in his other element, presenting a lecture to a hundred faculty and students of the Smithsonian Tropical Research Institute about the use of horse fossils in museums to illustrate evolution. MacFadden argues that many museums, including some of the largest in the United States, have done a poor job of illustrating the complicated evolution of the horse and thereby contributing to public misunderstanding of evolution in general. 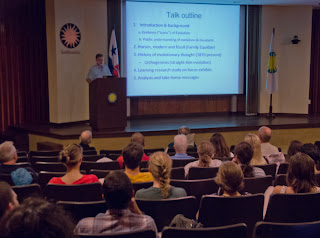 Fossil hunters see things differently from the rest of us. Where we see shells, they see teeth. Where we see wood, they see bone. This special skill was apparent during a trip to the Gatun Formation, one of the richest marine fossil sites on Earth.

As I looked around, I saw a lot of fossils, but to my untrained eye they looked like so many shells on the beach. Shark teeth are different, we were told. They were darker and shinier. We’d know them when we saw them, they said. So I looked. I got down low, scanning the ground for something that looked different. For a while, nothing. Then I saw it. A shiny brown tooth sitting on a small mound of dirt among thousands of white turritella shells, among the most abundant of fossils. Eureka!

I brought my find to graduate student Catalina Pimiento, whose research is on the giant Megalodon sharks that once roamed the oceans here. She has a special knack for identifying shark teeth, Bruce MacFadden says, and she quickly identified my find as a lemon shark, whose ancestors are common in the oceans off North and South America today.

Now I was on a roll. I knew what I was looking for. I was sure I would find more. Or not. I searched the ground for an hour without finding another tooth.

Meanwhile, postdoctoral researcher Jorge Velez had his own find on the other side of the Gatun site. Something that looked for all the world like a piece of scrap wood turned out to be a vertebrae from a prehistoric marlin. With great care, Jorge excavated his find, first stabilizing it with glue, then digging it out with a screwdriver and a hammer. Once freed from the surrounding rock, Jorge carefully wrapped it in toilet paper for transport back to the lab.


Bruce MacFadden, Jorge Velez and Catalina Pimiento are fossil hunters. They see things where the rest of us don't.


Posted by Explore UF Research at 8:31 PM No comments: 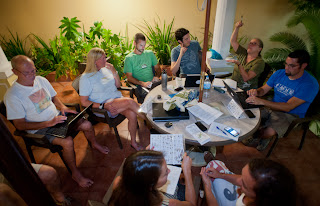 Tonight I witnessed an amazing demonstration of teaching professionalism in action.

Presented with the challenge of developing a lesson plan for a field trip to a fossil site in the Panama Canal for a group of Spanish-speaking children they have never met, the seven teachers quickly determined what their educational objectives were and how they would achieve them.

Within minutes they had come up with a host of engaging activities to help the students understand geologic time, learn how scientists collect and share data, identify different species and compare them to living organisms. 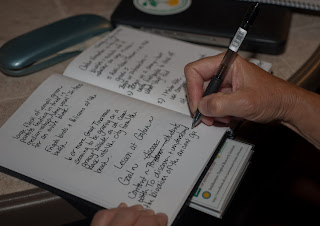 Then they were on the floor, performing a test run of the lesson, each of them assuming the role of a typical student, anticipating the opportunities and challenges that the lesson would present and adapting it accordingly. They recognized when the students’ interest might lag, and built in new activities and games to keep their attention. They also determined the supplies they needed – string, plastic bags, pencils, a meter ruler – and sent a contingent out to get them, on a Sunday night, in an unfamiliar city, in an unfamiliar language. 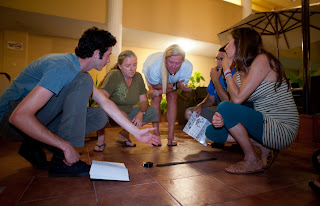 In addition, they made sure to include the Panamanian teachers in the process. “If they work through this lesson with us, it will be theirs,” said one of them. “We will be giving them the gift of a lesson.”

This is what teachers do. They see an opportunity to educate and they run with it. Every American who has ever been asked to vote on a school bond referendum should have the opportunity to see this process in action.

To read a perspective on how the lesson went, go here

UF Explore magazine editor Joe Kays will be in Panama from July 11-20, 2013 with scientists from the Florida Museum of Natural History as they search for fossils during the expansion of the Panama Canal.